The story of Nfluence began in a small town in northwest Ohio where former Bible college professor, Louie Weber, had been born and raised.

After having spent several years as a bible college professor teaching and training up students to become ministers, many of Weber’s students would confide in him that within a few short years of becoming pastors, they had become disenfranchised with “full-time ministry,” and were ready to leave their life’s calling.

As a result, Louie came to the conclusion that perhaps traditional bible college was not equipping these young students to be successful in real world applications of their faith. This realization led Weber to ask the question, “What if ministers were trained in ministry the way the early disciples trained its pastors – within the context of the local church?” The answer to that question led Pastor Louie to resign from his position at (formerly named) Kentucky Christian College, and move to his hometown of Wauseon, Ohio, to plant a church and develop an in-house ministry training school in the late 1990s. 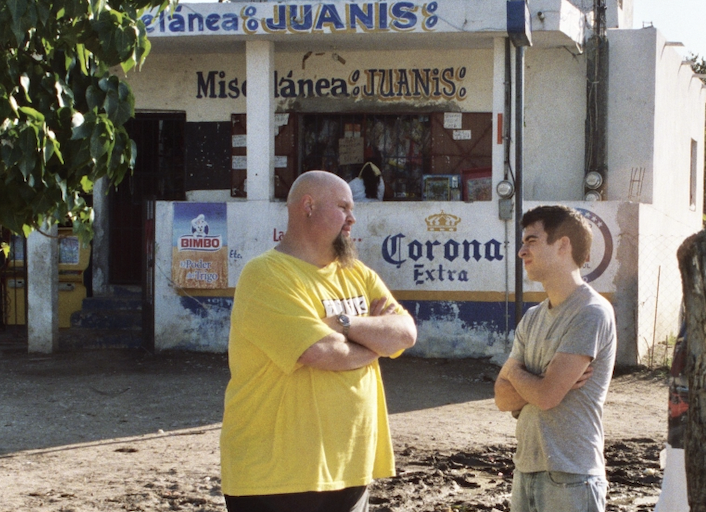 After much prayer and deliberation, the church that met in Pastor Louie’s basement named their church “Oasis,” and began their first meeting at the Wauseon High School gymnasium in the spring of 1995.

In 2001 Pastors Lucas and Krissy met Pastor Weber at a CIY (Christ In Youth) Conference in Adrian, Michigan, where Weber was the keynote speaker.

It was there that Pastors Lucas and Krissy confided in Pastor Weber that they were considering leaving their church in Granger, because they had started asking questions about the role and presence of the Holy Spirit in the modern church, (an unwelcomed question to ask in an evangelical denominational church.) Pastor Weber invited them to visit his church in northwest Ohio later that summer, and to attend their church’s annual “Encounter” worship conference.

After that brief “Encounter” weekend Pastors Lucas and Krissy knew God was leading them to be part of the Oasis Church and in 2002 they moved to Wauseon, Ohio to begin attending the Oasis Christian Fellowship Church and Ministry Training School established by Pastor Weber.

It was at Oasis where Pastors Lucas and Krissy met Pastors Jerry and Jill of Archbold, Ohio, and teachers at the Ministry Training School. Unknown to Lucas and Krissy at the time, Pastor Jerry had been connected to Andrew Wommack Ministries for close to 20 years through his teaching tapes and radio ministry, and been radically changed himself by the grace message.

Lucas would spend time working on Jerr’s lake cabin alongside him, while being discipled in the gospel of Grace.

Toward the conclusion of Ministry Training School, students were encouraged to seek the Lord regarding their next steps in ministry. After receiving a prompting by the Holy Spirit to read a passage in Ezekiel chapter 3, Pastors Lucas and Krissy received confirmation that God was sending them “home” to plant an “Oasis” Church in Granger, Indiana.

Pastors Lucas and Krissy held their first church meeting in Michiana in October 2004, and by spring of 2005 they launched first Sunday morning service on Easter Sunday. 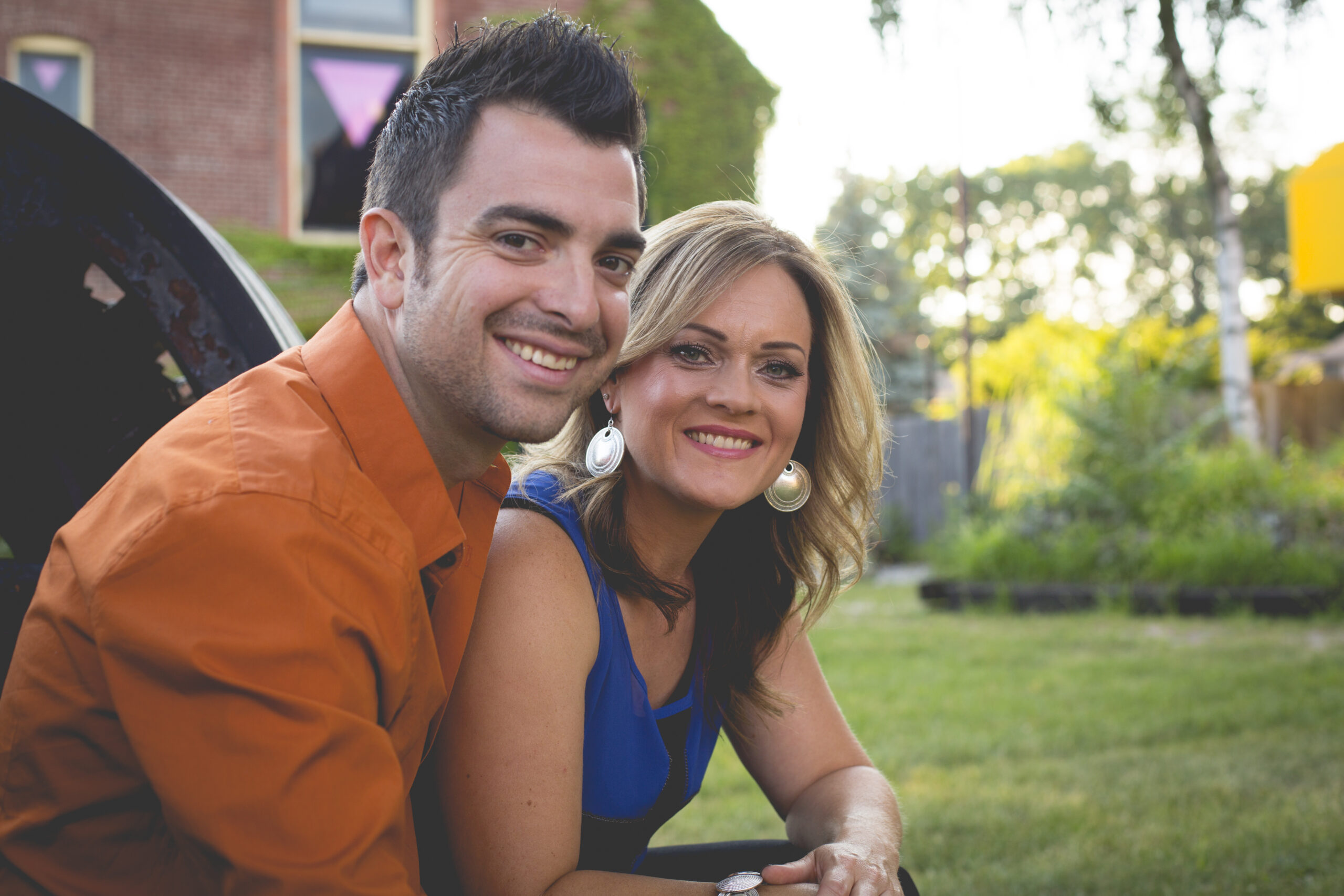 During the early years of the Oasis Granger church plant, Pastor Lucas continued to be deeply involved with ministry of the “Oasis Network of Churches,” a church-planting arm of the Oasis Church’s main campus in Wauseon, Ohio.

Pastor Lucas traveled frequently and extensively to Mexico and Kenya on behalf of The Oasis Network, preaching the message of grace to hundreds of pastors. It was during one of these trips that Pastor Lucas received a vision in a dream that he would one day oversee The Oasis Network.

In 2007 in a surprise move prompted by the Holy Spirit, Pastor Louie asked Pastor Lucas to become his successor as the President of the “Oasis Network of Churches,” and resigned his duties. Soon after, Pastor Lucas moved the Oasis Network headquarters from Northwest Ohio to Granger, Indiana. 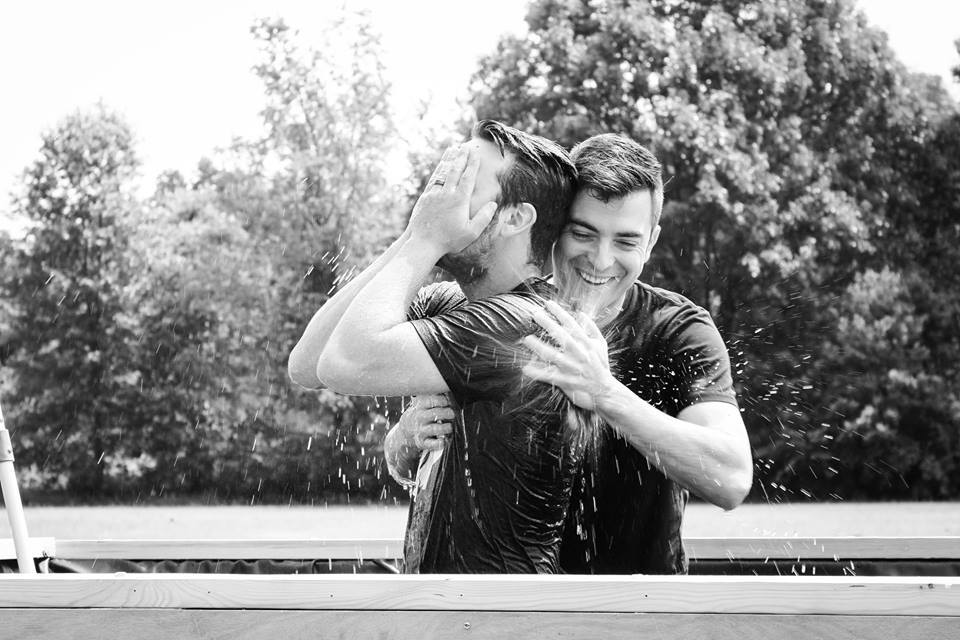 For several years Pastors Lucas and Krissy continued to both pastor the local Oasis Church in Granger, and simultaneously lead trips and expand the Gospel around the globe within the broader scope of “The Oasis Network.” In 2015 the Lord gave the pastors a plan to combine the local church and the network ministry into one cohesive ministry whose focus was (and still is) on bringing the Gospel of grace to the world.

The subsequent merger of the “Oasis Granger Church,” and “The Oasis Network of Churches,” brought various aspects of the ministry Pastor Weber began in the 1990s (i.e., local church expression, media and resource production, church planting, and missions) under one umbrella, now referred to as, “The Nfluence Network.” 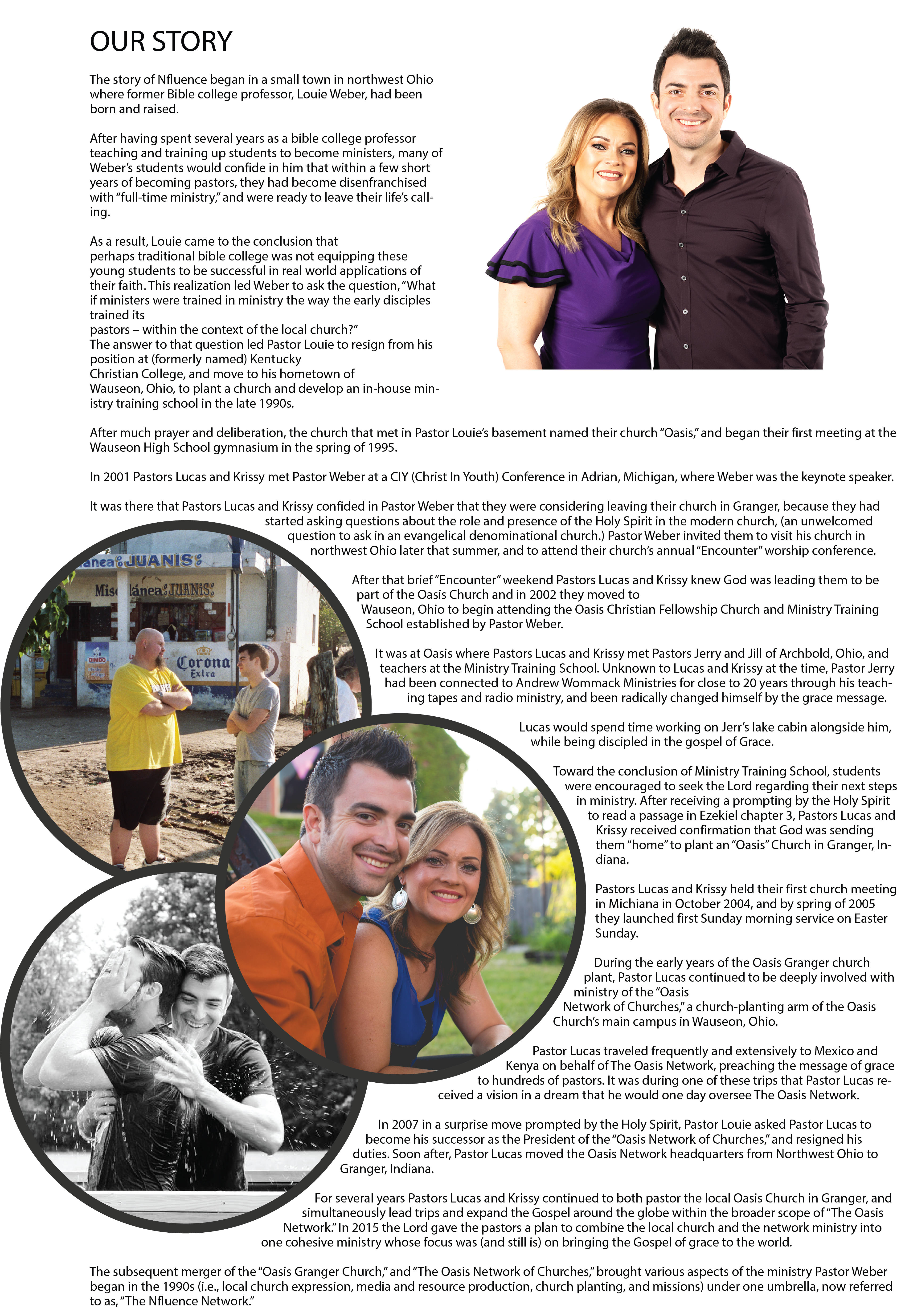 DOWNLOAD OUR FREE APP TODAY
GET YOUR FREE 5-DAY DEVOTIONAL